Tuning in to Volatility

Tuning in to Volatility

In this news article published by CIBC Investor's Edge Exchange, Peter Ashton writes about three of the most widely used indicators.

Canadian and U.S. markets have provided a very profitable backdrop for investors over the nine-year bull market that began in 2009. However, the ride has been far from smooth, with many ups and downs in the market along the way. Although buy-and-hold remains a very solid investment strategy, today’s market volatility provides opportunities for more active investors looking to time their entry and exit points with the aim of boosting their overall returns.

Technical traders often refer to market conditions as being “overbought” or “oversold.” These terms are rooted in the idea that an individual stock (or even the market as a whole) will tend to revert to its long-term trend. In other words, stocks that have risen too far, too fast are overbought and likely to decline back towards their longer-term trend. Similarly, stocks that are oversold are likely to rise. Over the years, technical analysts have developed a number of mathematical indicators that help traders identify overbought and oversold conditions such that they can better time their entry and exit points.

Three of the most widely used indicators for this purpose are Bollinger bands, MACD and RSI. 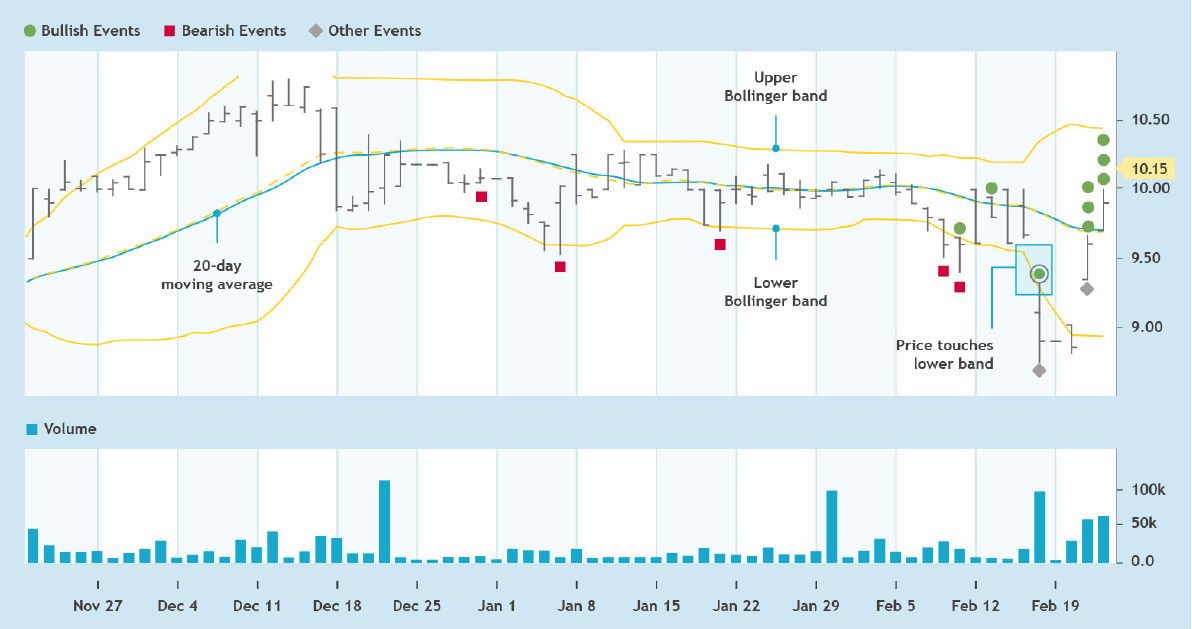 MACD is an abbreviation for Moving Average Convergence/Divergence. This indicator helps identify overbought and oversold signals by calculating the difference between two moving averages of different time periods. Typically, MACD is calculated by comparing the difference between a 26-day and 12-day exponential moving average. A 9-day exponential moving average is also plotted and called the signal line. When the MACD is rising, it indicates upward price momentum as the short-term moving average begins to pull away (diverge) from the longer-term one. When MACD crosses the signal line in the upward direction, it indicates an oversold (bullish) level. When MACD crosses the signal line in the downward direction, it indicates an overbought (bearish) condition. 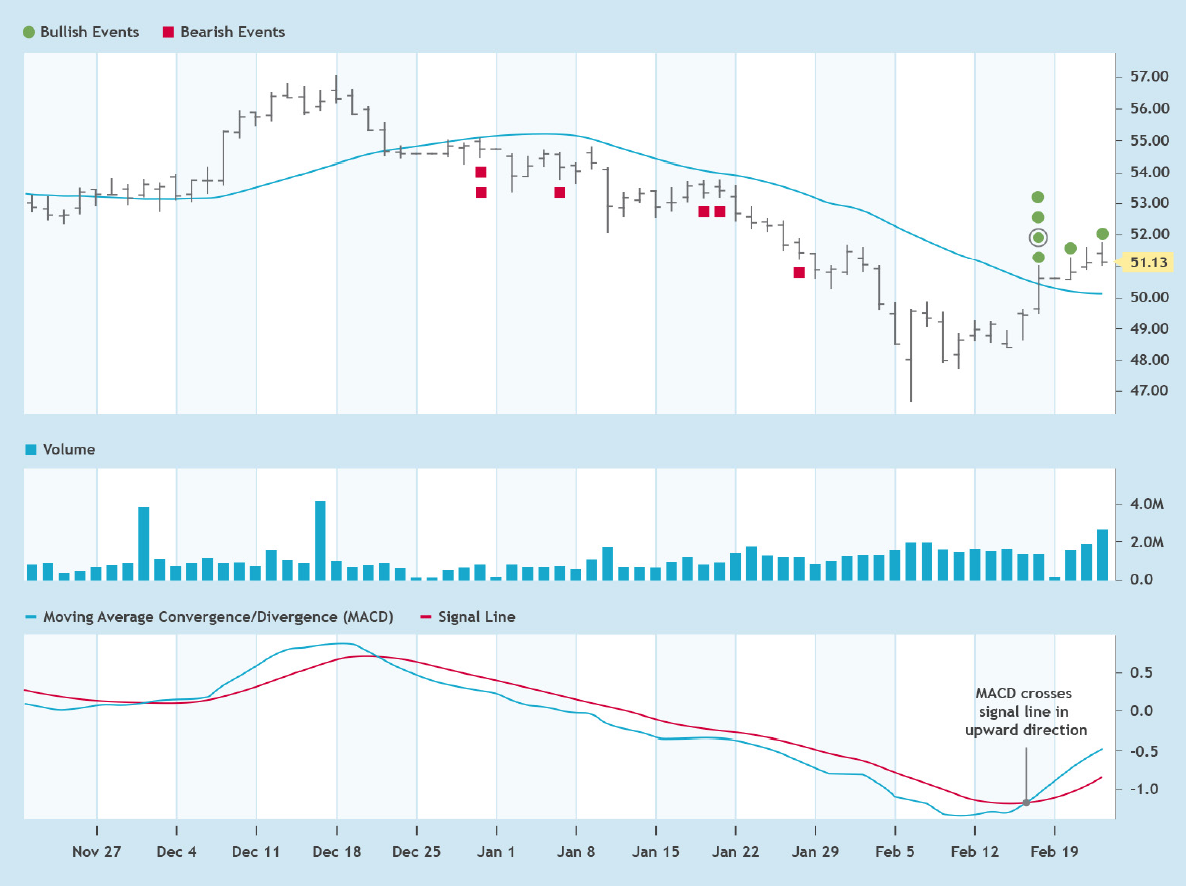 The Relative Strength Index (RSI) is an oscillator that measures a stock’s current relative strength compared to its own price history. RSI is plotted on a scale of 0 to 100. Leaving out the mathematical details, RSI looks at the average closing price in “up” days divided by the average closing price during “down” days over a 14-day calculation period. An RSI level below 30 implies that a stock is oversold while an RSI above 70 implies it’s overbought. The RSI moving above 30 is considered a bullish event whereas a move below 70 is considered a bearish event. 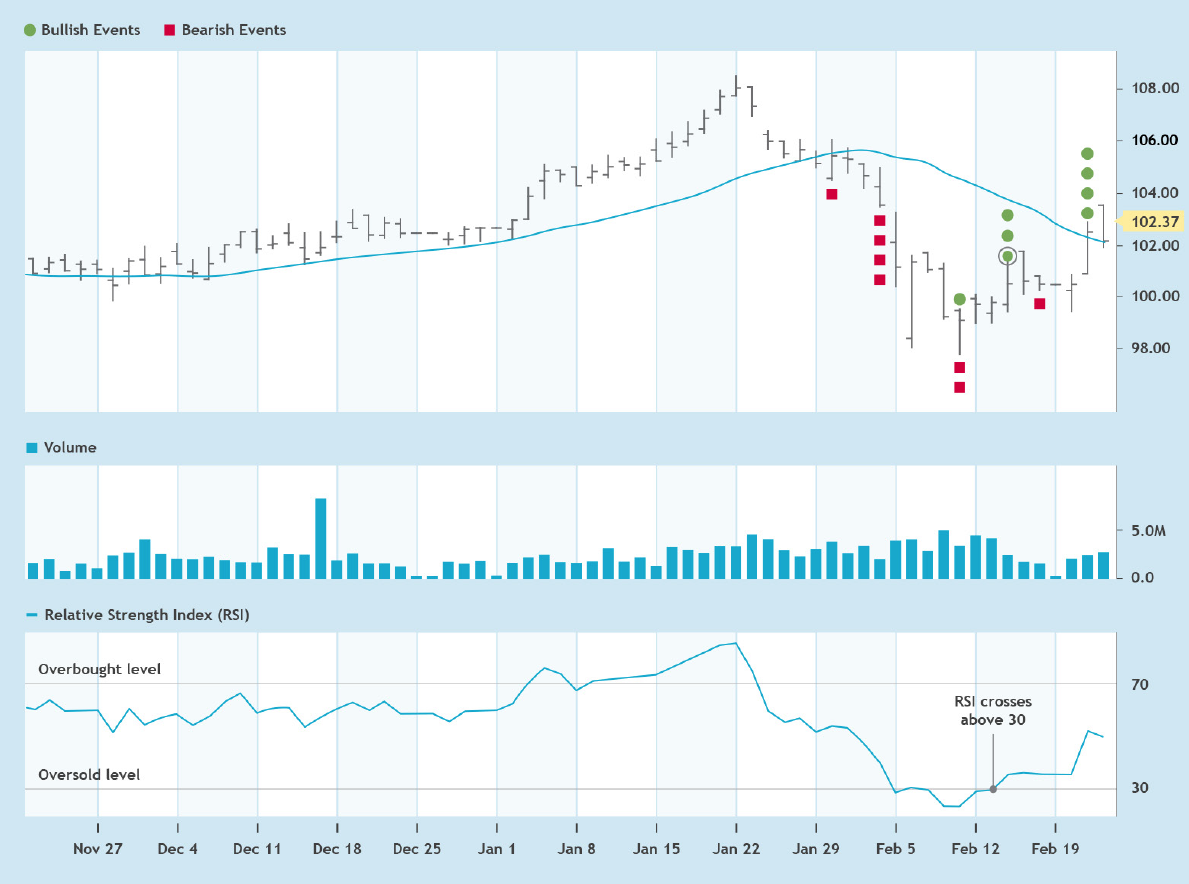 If this sounds complicated, you are not alone! Technical analysis is powerful, but it can be daunting for the novice investor or trader. The good news is that automated software tools make it easier to find and research stocks displaying overbought and oversold indicators.

With Technical Insight, you can look up a stock or ETF and see all its active technical patterns and indicators. Featured Ideas highlights ten trade ideas per day based on what’s poised to move from a technical perspective. Use the technical event screener to search for trade ideas in a given sector or based on a specific technical indicator like MACD or RSI. Set up email alerts to stay on top of your positions and tune in to signs of weakness.

To use Technical Insight, sign on to CIBC Investor’s Edge and select Quotes and Research, Market Centre. Select the Technical Analysis tab.

The investment ideas presented here are for information only. They do not constitute advice or a recommendation by Trading Central in respect of the investment in financial instruments. Investors should conduct further research before investing.