Looking at a daily chart, the S&P500 keeps trading higher above its 61.8% fibonacci retracement level from the most recent swing low of 2345 and December high of around 2805. We anticipate further upside towards 2816.5 and 2865 in extension. Our stop-loss has been raised to 2610 which is right on the 50-day moving average.

On a longer time horizon (weekly chart), the SPX has turned bullish with a stop-loss set at 2535 (February 2018 low) as we've closed above the 20-week moving average. The RSI has finally broken above its 50 level, which is a positive sign for the index.

The VIX dropped towards 16.17 and is now testing the November and December lows, which continues to be a positive factor for the U.S. indices. 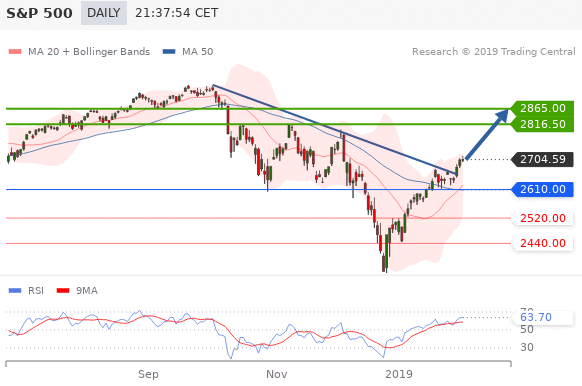 We had some big movers last week. Here's a look at the 8 most notable: